Dagger 2 is a compile-time DI framework that is becoming increasingly popular in Android development. Using Dagger 2 can make application structure more scalable and maintainable. However, in this post I am not going to tell you about all benefits of using Dagger 2. This article is intended for developers that already had some experience using this framework and are eager to learn it a little bit deeper. One feature of Dagger 2 is the concept of Scope. Scopes are not easy to understand from the first time of use and require some effort to get used to them for applying them correctly in a application.

If you are reading this article, I assume that you already have got your hands dirty playing with Dagger 2 and familiar with Component, Provider, Inject annotations and their purpose.

Before diving into the Scope mechanism, you should have a quite decent understanding of when and why the dependency injection mechanism is applied. Furthermore, I won’t describe some core theoretical concepts like a dependency graph, components and providers.

All code from the article can be found on GitHub.

The Definition of The Scope

What is a scope?

Scope – is a memory boundary that contains injectable dependency objects, with a component as an entry point, the lifetime of this memory region (dependency objects) is defined by the number or references to the scoped component. 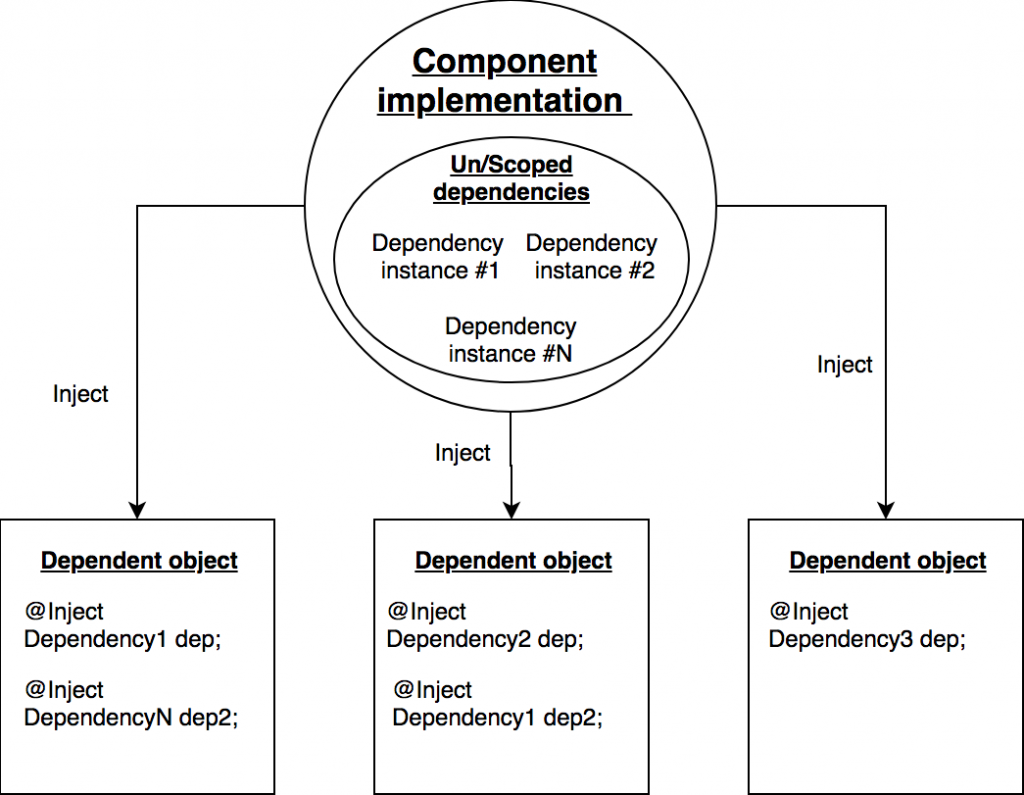 The definition above may be rough and not totally correct from some technical aspects, but I want to stress one important thing, that all objects in a scope will live as long as a Dagger component instance lives. All in all, there is nothing special about components or scopes, all usual Java/Android garbage collecting and reference counting mechanisms work here in the same way. The same instance of a scoped dependency is injected, when the same component is used.

Don’t misunderstand me, if your component is destroyed but a dependency instance is still being kept by some object, of course it won’t be destroyed, but next time you inject dependencies another instance will be provided.

Scopes are basically used during compile time for generating injectors and providers. We will see in a while how generated classes are used in runtime to maintain scoped dependencies.

Let’s create a really simple project for understanding the matter. I will take the liberty of violating all design best practices and principles for the sake of simplicity. (the best excuse for writing terrible code 🙂 ). I have used some boilerplate classes like BaseActivity, BaseFragment, explanation of these classes is out of scope of this article, hence you can find full code on Github.

Firstly, we need to define some scopes to have something to investigate. I have defined quite common scopes that are usually used in Android Development. 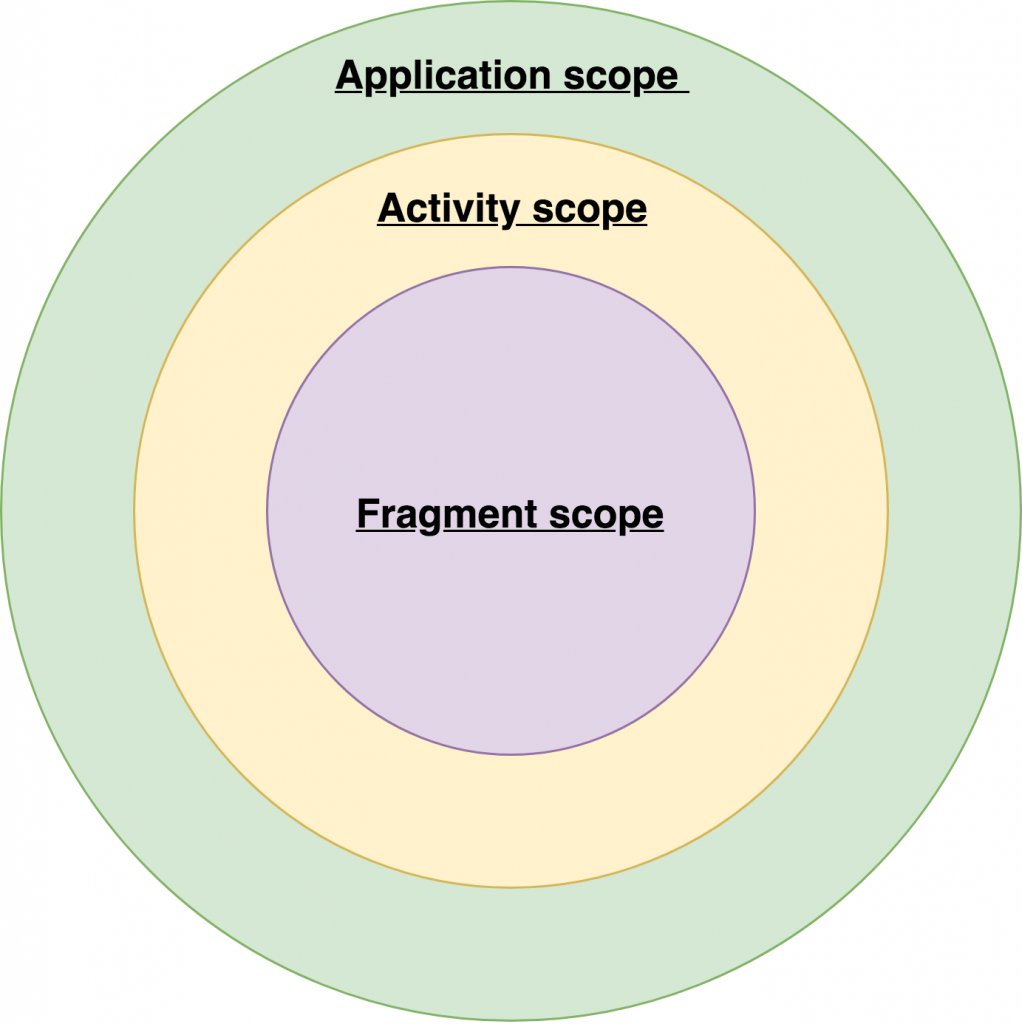 As you can see from the picture above all scopes are really tied to Android SDK classes and have respective names. Why do we usually have such scopes in android applications? Because we as developers are driven by frameworks, in that case it is Android SDK and we have not much control over the lifecycle of core system components like activities, fragments.

The app itself consists of two activities and four fragments. Each of activities is responsible for keeping two fragments respectively. You can switch between fragments inside a single activity or switch to another activity. 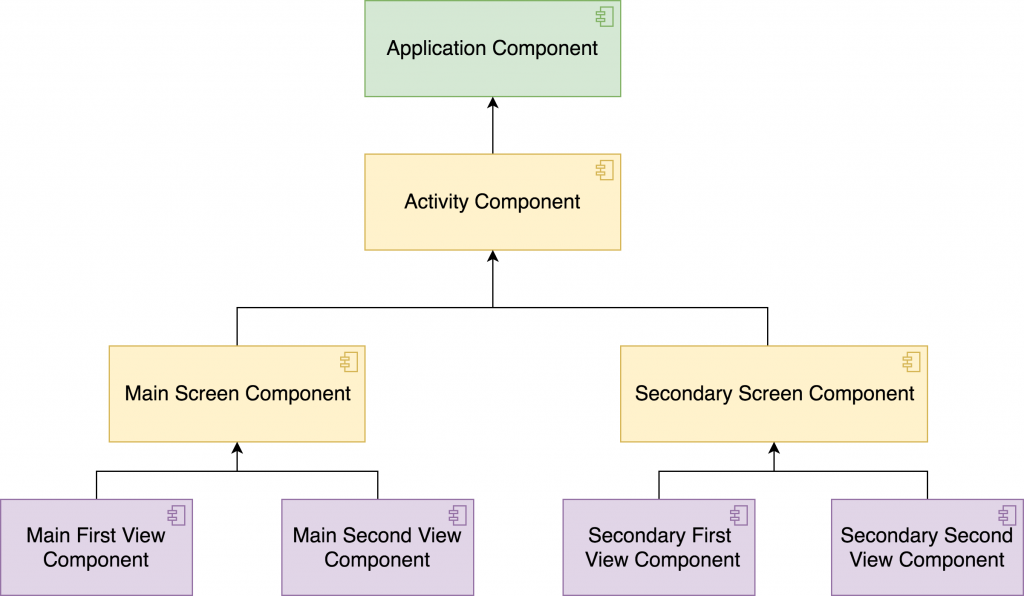 Names are chosen just to make it clear which Android class a component is related to. I would have never used such names in real application.

First of all, we need to define custom scopes, from the code perspective, a scope is nothing more than annotation. We will have multiple Scope annotations:

A custom scope is defined as follows:

In order to create a Subcomponent, we need to access a parent component, hence let’s define an interface for that purpose.

Hi, my name is Molochko Alexander, I am Interested in different areas of software development, curious about learning and discussing architectural and software patterns, examining internals and understanding how everything works under the hood.